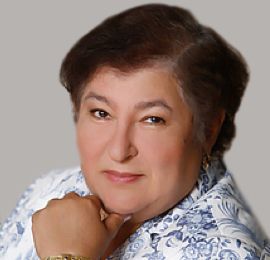 Equity interest in the share capital of Sberbank: 0.0004% Ms. Zlatkis’ holding of the ordinary shares of Sberbank: 0.0005%. Has no family relationships with the other persons who are members of Sberbank’s management bodies and bodies supervising Sberbank’s financial and business operations. Supervises and coordinates the work of the GR, Legal Issues, Compliance and Subsidiaries Unit and the Internal Audit Directorate.

In 1970 she graduated from Moscow Financial Institute with a specialization in "Finance & Credit". In 1978, upon completing her post-graduate study at the All-Union Correspondence Institute of Finance and Economy, she was awarded a Ph.D. in Economics.

From 1970 to 1991, she held a number of positions at the Ministry of Finance of the Russian Soviet Federative Socialist Republic: economist, senior and chief economist, head of the Industry Financing Department, deputy head of the Department for Improvement of the Economic Mechanism and Prices, head of general departments, and head of the Financial Market, State Credit and Loans Administration Department.

From 1993 to 1998, she was the Head of the Securities and Financial Market Department at the Ministry of Finance of the Russian Federation.

From 1998 to 2000, she headed the Internal State Debt Department at the Ministry of Finance of the Russian Federation.

In 2000-2004, she was Deputy Minister of Finance of the Russian Federation.

From 2004 to the present, Deputy Chairman of the Executive Board of Sberbank..