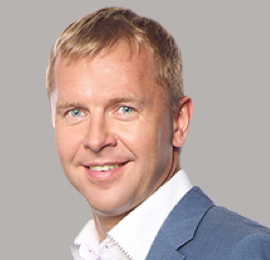 Deputy Chairman of the Executive Board of SberBank

Anatoly Popov was born on December 5, 1974 in Novosibirsk.

From 1994-2001, he held management positions in the sales departments of regional and international companies.

From 2002-2005, he was Regional Director of Sales at SUN InBev in Novosibirsk.

From 2007-2009, he was General Manager at AB-InBev in Bulgaria and Chief Operations and Commercial Officer in Russia.

From 2010-2011, Anatoly Popov  was Chief Executive Officer of VimpelCom in Kazakhstan.

In May 2011, he was appointed Vice-President of Sales at SberBank.

In February 2016, Anatoly Popov was appointed Senior Vice-President of SberBank and Head of the Corporate Business Block.

Anatoly Popov has been awarded the medal of Order of Merit for Service to the Fatherland (2nd class) and a Letter of Gratitude from the President of Russia.