S. Kuznetsov and L. Bogyslavskiy at the “Advanced Technologies: the Future of Management Decisions” session of the 7th All-Russian Corporate Governance Forum

30/11/2017, Moscow — Sberbank became a strategic partner and an active participant in annual events related to corporate governance, such as the 7th All-Russian Corporate Governance Forum, and the 12th Director of the Year National Award for the fourth time. These events took place in Moscow on 28 November 2017.

This year, the Forum focused mainly on digital technologies, their impact on business processes, including corporate governance practices. Discussion of fundamental principles of advanced corporate governance, management of cyber risks, the role of the Board of Directors in the new digital age were the main issues discussed at the first session of the Forum titled “Corporate Governance in the Digital Age”, which was attended by Andrei Sharonov, Dean of Moscow School of Management SKOLKOVO (a moderator), Presidential Adviser on Internet Development, German Klimenko,  First Deputy Governor of the Bank of Russia Sergey Shvetsov, Deputy Head of the Federal Agency for State Property Management (Rosimushchestvo) Roman Bogdanov, Vladimir Gusakov, Managing Director of Government Relations of Moscow Exchange, Alexander Ikonnikov, Chairman of the Board of the Independent Directors Association (IDA), Igor Lotakov, PwC Russia Managing Partner, Roman Tikhonenko, President of AIG (Russia), and Deputy Chairman of the Executive Board of Sberbank Bella Zlatkis. Thus, in her speech, she emphasized: Digital economy is a way of achieving goals, and the goals include effectiveness, transparency, respect for the interests of majority owners, minority shareholders and the state.”

Sberbank supported the second session of the Forum titled “Advanced Technologies: the Future of Management Decisions” moderated by Vladimir Pozner, an eminent journalist and TV host.    Sberbank’s session was attended by Eddie Astanin, Chairman of the Executive Board of the National Settlement Depository (NSD), Leonid Boguslavskiy, an independent member of the Supervisory Board of Sberbank, Oleg Vyugin,
Deputy Chairman of the Supervisory Board of NSD,  Andrei Dubovskov , President and Chairman of the Management Board of MTS PJSC, Deputy Chairman of the Executive Board of Sberbank Stanislav Kuznetsov, PwC partner Tim Klau (Russia), Founder, Co-owner and President of IBS Anatoliy Karachinskiy, and Alexei Vasilchuk, co-owner of RestArt restaurant holding.

The main issues discussed included the impact of blockchain and artificial intelligence technologies on the speed and quality of decision-making, new opportunities in cyber reality, a search for new ideas and innovation within the company and outside it, the role of the Board of Directors in choosing the right strategy for IT management and cyber security. “Today, the main goal of any company is to find growth points and be competitive. It is important for the company to become a digital one, as there is a global trend towards digitalization of new products. The Board of Directors should support the company’s initiatives and help it, having analyzed the challenges and opportunities provided by technologies. One should prepare for the future in advance by learning about trends,” emphasized an independent member of the Supervisory Board of Sberbank Leonid Boguslavskiy.

During the discussion of modern cyber threats and the main ways of ensuring cyber security, Deputy Chairman of the Executive Board of Sberbank Stanislav  Kuznetsov pointed out: “Cyber threats currently pose a very serious problem which is also a financial one: Sberbank estimates annual losses caused by cybercrime at 600 to 650 billion rubles.”

Traditionally, after the end of an official part of the program, an awards ceremony was held to give awards to the winners of the Director of the Year National Award which is to mark personal contribution of directors of Russian companies to the development of corporate governance. Winners and holders of the Award are determined by an Expert Council comprised of representatives of the regulator, leading Russian companies, the investment community, professional associations and Award winners of previous years. In 2017 Nadya Wells, an independent member of the Supervisory Board of Sberbank, became a winner in the “Independent Director” category 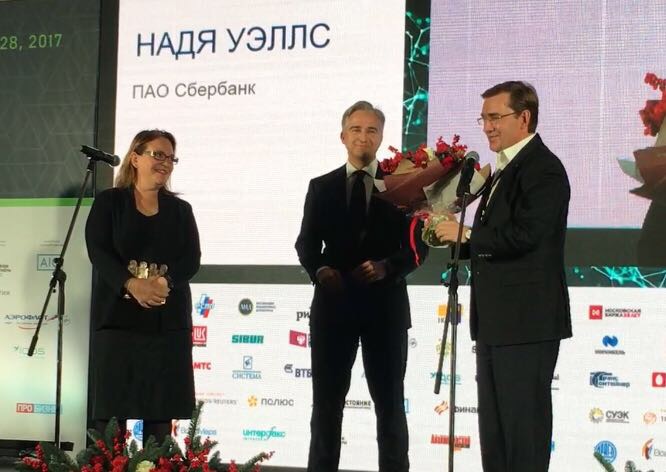 Nadya Wells, a winner of the 12th Director of the Year National Award 2017 in the “Independent Director” category

It is a great honor to be a winner. When I ceased to be an investor, I wanted my life to be interesting and to have an opportunity to work with a good team and good people.  And I really have these. It is never boring to work at Sberbank, things change every day.  Most of Sberbank’s employees are women, and this award is for you,” emphasized Nadya Wells in response to arrangers and guests of the Award.